The Blue Max is a 1966 British war film in DeLuxe Color and filmed in CinemaScope, about a German fighter pilot on the Western Front during World War I. It was directed by John Guillermin, stars George Peppard, James Mason and Ursula Andress, and features Karl Michael Vogler and Jeremy Kemp. The screenplay was written by David Pursall, Jack Seddon, and Gerald Hanley, based on the novel of the same name by Jack D. Hunter as adapted by Ben Barzman and Basilio Franchina.

In contrast to films that romanticize the Flying Aces of the Great War, the protagonist of The Blue Max is depicted as a man with no conscience, no empathy, and no feelings for anyone but himself. The film also explores the decline of chivalry and the advent of total war.

The Charge of the Light Brigade (1968) I seicento di Balaklava

The film is about the folly of war, and the poor state of the British Army and its leadership during the Crimean War (1853–56). Britain had not fought in a European theatre since the Battle of Waterloo in 1815, and the army had become sclerotic and bound by bureaucracy. Tactical and logistical methodology had not advanced in forty years, and the whole ethos of the army was bound in outmoded social values.

The anti-hero is a relatively competent officer, Captain Louis Nolan (David Hemmings). A veteran of the Indian Army, Nolan is unusual in the hierarchy of his day both for having combat experience and for having acquired his commission through merited promotion as opposed to purchase. As such he regards many of his colleagues, who are mostly aristocratic dilettantes casual about squandering their subordinates’ lives, with contempt.

Nolan’s superior is the gruff Lord Cardigan (Trevor Howard), who treats the regiment under his command as his personal property and who dislikes Nolan as an “Indian” officer with a native Indian servant. Cardigan’s men are typical of the common soldiers of their day; though reasonably well-equipped – compared with the Russians – they are also poorly trained and supplied. They endure squalid living conditions and are punished mercilessly for the slightest missteps in their duties. Nolan soon gets into a highly publicised feud with Cardigan, who is angry at him for ordering Moselle wine at a banquet where all guests were to drink champagne.

British forces are led by Lord Raglan (John Gielgud), a Waterloo veteran and an amiable, vague-minded man who proves a poor commander. Despite having been a disciple of the recently deceased Duke of Wellington for decades, he has not his military flair. As campaign preparations begin he is preoccupied with a bad mistake he made while allotting commands, requiring Lord Cardigan to lead the Light Cavalry Brigade under his equally unpleasant arch-rival and brother-in-law Lord Lucan (Harry Andrews), who has been appointed to command the Cavalry Division. Captain Nolan, enlisted as Raglan’s aide, is glad to get away from Britain; it gives him an escape from the morally uneasy affair he has been having with Clarissa Morris (Vanessa Redgrave), the wife of his best friend William (Mark Burns). Also travelling with the British command is the 8th Hussars’ paymaster’s wife named Fanny Duberly (Jill Bennett), who wants to observe battle first-hand (and be near Lord Cardigan, with whom she is infatuated).

Britain and its ally France travel to the Crimea, where they march inland to attack the strategically important city of Sebastopol. Along the way the British forces are ravaged by cholera, an occurrence met with palpable indifference by their commanders. Captain Nolan, although no friend of his subordinates, is frightened to see the army’s organisation fall apart as men are consumed by the disease. When the outbreak passes, British and French forces win at Alma, but Lord Raglan refuses to allow the cavalry to press the advantage, so concerned is he with keeping the cavalry as an undamaged reserve. As a result, the Russians reinforce the road to Sebastopol, necessitating a series of further battles before the British even reach the city. Back in England the press lies that the city is captured and Russia’s government humbled. As the war progresses Lord Cardigan retires nightly to the yacht he keeps on the coastline to hold formal dinners, at one of which he seduces Mrs. Duberly.

Captain Nolan has been growing increasingly exasperated at the ineptitude of Raglan and the other officers, which has caused needless death and delay at every step. His emotions reach a tipping point when at the Battle of Balaclava, a Russian raiding party captures an improperly defended British fortification, carrying away several pieces of artillery. Lord Raglan is slow to respond, and Nolan demands he take steps to recover the valuable equipment. Raglan issues badly worded orders, that the cavalry leaders misinterpret. Nolan secures another. The British cavalrymen are in a valley that branches off in two directions; one contains the escaping raiders, the other an artillery battery and a sizeable reserve of Russian cavalry. Lord Raglan did not bother to mention this in his order, since the lay of the land is obvious from his high vantage point. Cardigan, at his lower level, can only see the valley with the cannons, and assumes that he must charge into this. When he queries the order, Nolan loses his temper and gestures vaguely with his arm, shouting “There, my Lord, is your enemy and there are your guns!” (these, or something close to them, were his actual words). As the cavalry advances into cannon fire Nolan – who has gained permission from his friend Morris to ride with Cardigan’s light brigade as they chase the Russians – realises his mistake, but is killed by shrapnel before he can warn Cardigan. This is ‘The Charge of the Light Brigade’.

The Light Brigade, torn apart by the cannons, clashes briefly with the Russians and then retreats. With most of his force dead or wounded, Lord Cardigan who led his men valiantly, is ironically unharmed, but he immediately begins bickering with the other officers about who must take the blame for the disaster. The British army at its very best and worst. 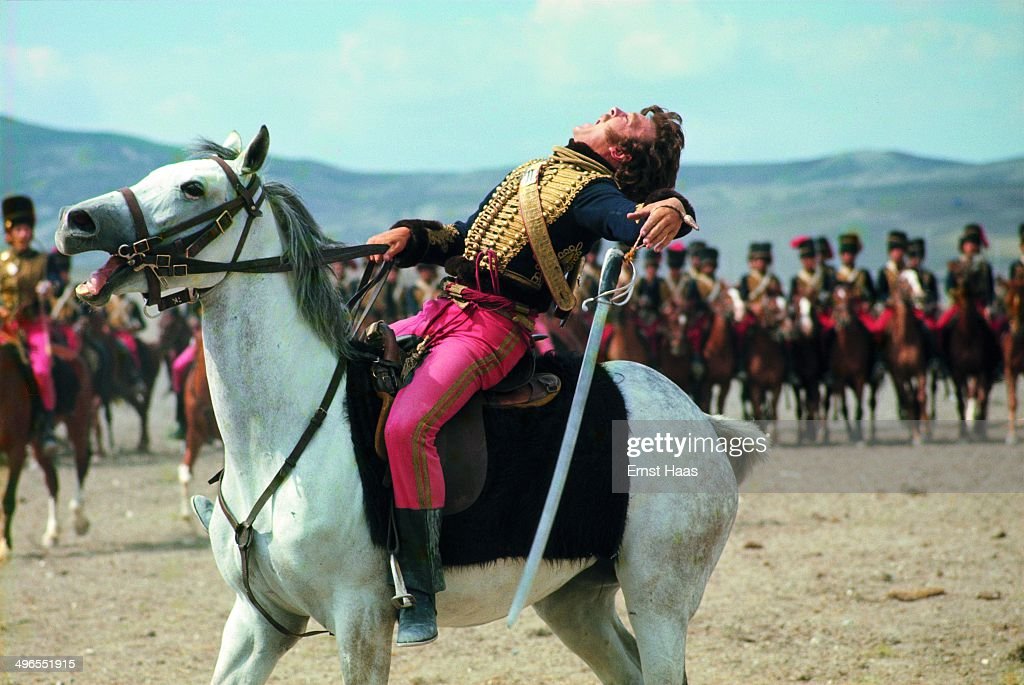